MapQuest–vessels, wall tiles, and tile books
series 1 STARCHARTS
I use Schiaparelli’s drawings of the Martian landscape in StarCharts, including the winding grooves or “canali”, because they are beautiful; also because, once the Italian word was translated as “canals”, the connotations of the English word sparked the hope of intelligent life elsewhere. And on the heels of that hope came the rise of science fiction. Who could forget Bradbury’s Martian Chronicles:
The Martians were there—in the canal—reflected in the water…. The Martians stared back up at them for a long, long silent time from the rippling water.

The Copernicus and Galileo pieces are a nod to the long struggle to recognize a heliocentric universe. As a result, we have doubted our fixed place as the center of the universe, and the meaning of almost everything.
In order to help restore that belief in surety of place Galileo, in his recantation, had to say:
I, Galileo, son of the late Vincenzo Galilei, Florentine, aged seventy years, arraigned personally before this tribunal, and kneeling before you . . . must altogether abandon the false opinion that the sun is the center of the world and immovable, and that the earth is not the center of the world, and moves, and that I must not hold, defend, or teach in any way whatsoever, verbally or in writing, the said false doctrine . . .
Galileo then may have muttered, “And yet it moves.” One hopes that he did. 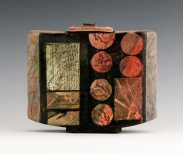 In Borders, I use the declassified communiques that deal with the partition of the Indian subcontinent, the slashing red lines superimposed on maps of the divided states alluding to the mere three weeks that it took Sir Cyril Radcliffe to arrive at the capricious boundaries of 1947, piercing rivers, villages, populations. The colors and patterning of the pieces call to mind both the Union Jack and the traditional draping of a sari, and “Here” and “There” are written in the languages of the divided regions on either side of a line. 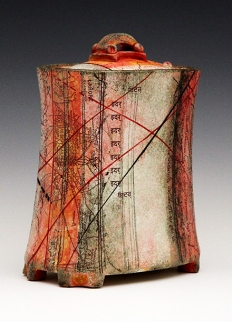 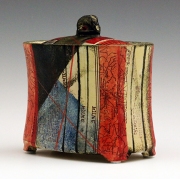 In counterpoint to the Borders pieces, the Ratri Sukta books, the Mandala vessels, and two groups of wall tiles, Ratri Sukta and Mandala, present an imagined cosmos of a much earlier time in South Asia, through hymns of creation and hymns to the night from the Rg Veda, the oldest of the books that the invaders of Northern India brought with them as they rode over the Caucasus around 2000 BC. I learned Sanskrit from J.A.B. van Buitenen at the University of Chicago, and after the arduous grammar lessons, he would put forth his unforgettable views of the creators of the Rg Veda as a group of bards, gathering round a fire and getting drunk on Soma, which van Buitenen imagined as being very much like mead, and composing their verses to the night, the fire, the sun, the universe. 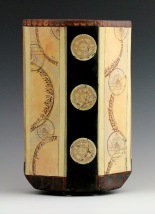